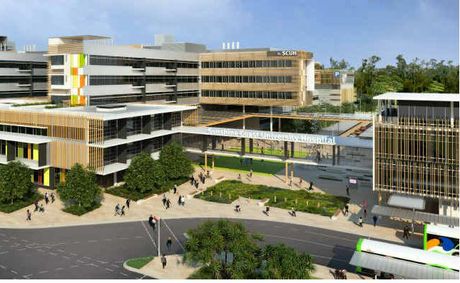 In a bold offer to the private sector the Queensland Government says it will entirely outsource the daily operation of a Sunshine Coast hospital.

The $1.8 billion University Hospital at the Sunshine Coast is expected to open its doors in 2016, with further plans to reach a total of 900 beds after 2021. If the Queensland Government’s efforts to include it in their privatisation agenda are successful it would be the largest publically-owned teaching hospital to be managed by a commercial operator in Australia.

The State Government insists it would still be a publically-owned hospital, but they are seeking expressions of interest for providing all clinical and non-clinical services. Experts say the State’s argument that money would be saved is invalid; they say there is no proof the private sector is better at running a hospital than the public.

The idea is by no means new and has in the past found varying levels of success, as highlighted by former secretary of the Commonwealth Health Department Professor Stephen Duckett, who says; “There's been a number of hospitals - probably less than 10 public hospitals - that have been run by private for-profit operators, it's certainly probably the largest of these outsourcing arrangements... there was a high-profile collapse in Queensland a decade or so ago... others have been mired in contractual disputes.”

The Sunshine Coast University Hospital Action Group spokeswoman Maureen Mileham says, “It’s going to be a huge hospital and it worries me that private enterprise taking over that size of hospital and running it completely... I was hoping that they would give it the opportunity to become a great public hospital, run by public enterprise as many big hospitals are across the world.”