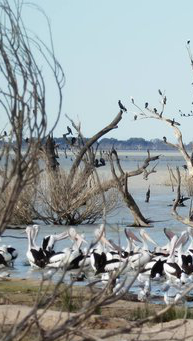 Floodwaters have flowed into the Menindee Lakes for the first time in five years.

For the first time since 2016 there is now enough water to open the gates between Lake Pamamaroo and Lake Menindee.

“You don't know whether to smile, cry, laugh,” he told the ABC.

“It's pretty emotional when you've seen this landscape basically barren, dead, gone — everything that has relied on it, even us as people, our birds, animals, plants, I think they're all smiling. It's something to celebrate.

“Without water it kills our spirit, kills our culture, kills our emotions, and today looking at that brings all that back and I think there's hope.”

The Murray-Darling Basin Authority (MDBA) takes control from the NSW government when the water volume in the Menindee Lakes exceeds 640GL.

This will allow it to access water in the lakes on behalf of South Australia, Victoria and New South Wales.

When the lakes last filled, the MDBA released much of the water downstream to meet demand in the Murray-Darling system.

This was a controversial decision, and this time around, farmers in NSW say they hope management decisions will be better.

“Everybody wants as much water to be kept there for that community to enjoy," NSW Water Minister Melinda Pavey said.