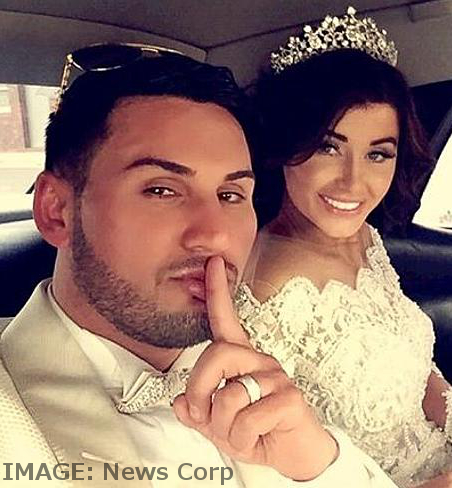 The Western Sydney councillor who made headlines nationwide after shutting down a suburban street for a lavish wedding party has been fined a whopping $220.

Auburn deputy mayor Salim Mehajer, who is also a property developer, angered many by closing down a street of Lidcombe and sending fake flyers to warn residents that their cars would be towed if they stayed.

Cr Mehajer brought a crowd of hundreds to the public gallery at an Auburn council meeting on Wednesday night to hear the fine for closing a street without permission from council.

But Auburn Councillor George Campbell though the low fine was not enough, and moved a motion to have the Local Government Minister investigate Cr Mehajer's conduct.

The motion was defeated six votes to four, including Cr Mehajer’s vote in favour of himself.

Cr Campbell and fellow councillor Irene Simms said there was a bigger issue than just the illegal closure of a street.

They said authorities should explore whether Mehajer’s stands to benefit from his position on council, given his other job as a developer.

Cr Mehajer has more than a dozen investment properties in the area.

“This absolutely is an ethical question,” Cr Campbell said.

There are also reports that Cr Mehajer downsized units in an apartment block project in Lidcombe in order to increase his profits by $45 million.

His development company Mehajer Group said this was not true.

“The amendments to the Auburn Local Environment Plan (LEP) involved consultation with and approval from the Auburn City Council and Department of Planning and Environment and is part of the future urban growth proposals and design of the Lidcombe town centre,” a company statement said.

The company said those who bought off the plan were aware that the size of the units could be changed.

There is controversy too about the councillor’s role in regard to a 2012 NSW Government amendment of the Local Government Act, which enabled councillors to vote on planning proposals in which they had a pecuniary interest.

“We've had a number of walkouts where some of us councillors left the chamber because we thought it was immoral these councillors were voting for things that would give them such significant increase in the yields for their development.”

Cr Simms the Government was providing developers with a legal loophole to benefit from their positions.

“I did send an open letter to the Independent Commission Against Corruption. It was funny because at the time all this stuff was happening with state ministers going from their jobs because of deals they had done with developers to have their applications approved,” she said.

“Yet in local government, these people, and it's legal, they are allowed to legally sit there and vote themselves [for] significant heights of buildings that can potentially give them huge yields. We're talking lots of money.”

While some are trying to use the wedding debacle as an impetus for change, it is being deflected by figures at higher levels.

For some, all that is left is to bask in gaudiness, the smorgasbord of poor taste, the unbridled tackiness, the cosmetic surgery catalogue that is the Mehajers’ pre-wedding video.