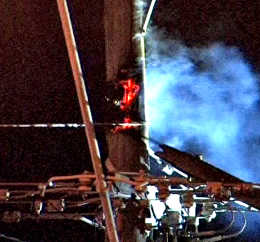 Authorities say there should be a much lower fire risk following a $620 million upgrade of wooden power poles in WA.

Safety regulator EnergySafety has gone over the massive upgrade project by Western Power to replace or reinforce 170,000 power poles.

The review found that the network now complies with a safety order issued to the utility in 2009.

EnergySafety director Ken Bowron said it was a dramatic improvement.

“Western Power now has proper risk based management practices, not just for their wood poles, but for all their plant and equipment.”

The project came in well under the estimated cost of $1.2 billion.

It was launched in the wake of safety audits in 2005 and 2006, which found major issues in the monitoring and management of wood poles by Western Power.

A review of those audits two years later found Western Power had “failed to address the critical safety issues”.

A dramatic light was shed on the issues after a major fire at Toodyay, which was allegedly triggered by a fallen power pole.

EnergySafety’s investigation could not determine the origin of the blaze, but was still enough to get the state to deal with its wooden pole network.

“This has been, to a large extent, a catch up for decades of under-investment, so it will require additional investment in the poles and wires going forward,” he said.

Dr Nahan said Western Power will have to ensure the network is properly and safely maintained for the future.

This will mean more audits and supervision from EnergySafety, and measure to fix other areas of concern.