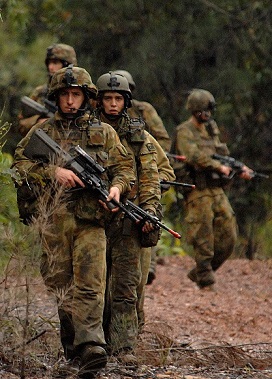 Both sides of Queensland politics are fighting to stop the compulsory acquisition of agricultural land for an army training ground.

Australian Defence Force (ADF) has plans to buy up thousands of hectares near the city of Rockhampton to expand the Shoalwater Bay training facility.

Defence wants to be able to play war games on a larger scale, and train an increased number of Singaporean troops in the region.

About 50 graziers have received notices of the planned acquisition of their land, causing outrage in rural communities.

Farm lobby Agforce says it hopes the state's two major parties will find room to move with the Federal Government.

Defence is allowed to acquire state government land under the Commonwealth land acquisition act, but Queensland Premier Anastacia Palaszczuk says the Federal Government should have consulted the community.

“We're angry about it. What the Federal Government has done is turn the back on these families,” she said.

She said the expansion “is not needed... the Shoalwater facilities are enough.”

LNP Opposition leader Tim Nicholls has written to Malcolm Turnbull, while the opposition agriculture spokesman, Dale Last, wants the ADF to find and alternative location that is not prime agricultural land.

“They need to look further afield, go into some of that more marginal country where they're not going to have such a big impact,” he said.

“Basically it's Big Brother — the Federal Government has come in and is kicking them off their land.”

AgForce president Grant Maudsley said there should not be any forced acquisitions, and warned of the potential impact on the local meatworks industry.