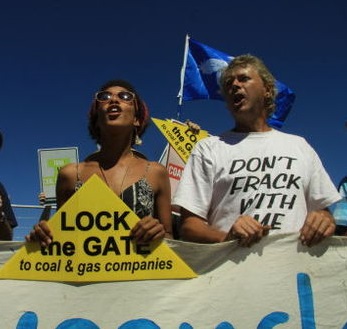 Fighting against growing risks to farmland, native forests and water supplies will be the focus of the vocal Lock the Gate Alliance ahead of the upcoming NSW election.

Phil Laird, National Coordinator for Lock the Gate, has launched the environmental advocacy group’s campaign for the poll later this month.

He says whoever wins must answer the cries of communities around the state, who “have had to fight a rearguard action to protect themselves and their environment”.

“This election the Alliance is seeking real commitments from the political parties to rein in the extractive industries, providing certainty to regional communities and committing to the protection of land and water,” Laird said in an opinion piece this week for the Sydney Morning Herald.

“Members of the Alliance were dismayed that the NSW Coalition government walked away from its 2011 election promises regarding mining and coal seam gas after it came to power.

“A suite of Liberal-National Coalition promises that encompassed no go zones, ring fences and protections for groundwater and community health were trashed a few months into government,” he said.

The Alliance wants responses from all parties on:

“Last weekend, it was revealed that the NSW government has been meeting secretly with 11 coal companies to open up 45,000 hectares of new coal mining areas in the Hunter, suggesting that little has been learnt from the ICAC coal corruption scandals,” Laird said.

“Meanwhile, the NSW Gas Plan is in tatters after it was effectively rejected by a cross-party NSW Parliamentary Inquiry. These are issues that matter to country New South Wales, and increasingly people in the city are aware and focussed on the damage that mining is doing to our water and our foodbowls.

“We’re asking the parties to respond to our questions by 13 March, so the community can have a clear understanding of their commitments when it comes to mining.”

As if on cue, the NSW Planning and Assessment Commission has announced that the expansion of the Warkworth mine in the Hunter Valley is “capable of being approved.”

This is despite two court decisions rejecting almost identical applications, and years of struggle with local community groups.

The Planning and Assessment Commission’s report on the Warkworth expansion admits that changes in State Government policy since 2013 that favour the coal mining industry are a big part of it being deemed “capable of being approved”.

John Krey, spokesperson for the Bulga Milbrodale Progress Association said; “Giving the green light to this project today is confirmation that the legal and regulatory system that governs mining is broken and that NSW residents cannot count on it to serve the public interest or protect our precious land, water and heritage”.

“We have fought this project in court, and won twice, but despite this the NSW government changed the rules to push it through, quashed our rights to appeal in court, and worked behind closed doors with mining giant Rio Tinto to ensure its proceeds.

“We never expected the NSW government to work with Rio Tinto to pervert a just outcome either.”