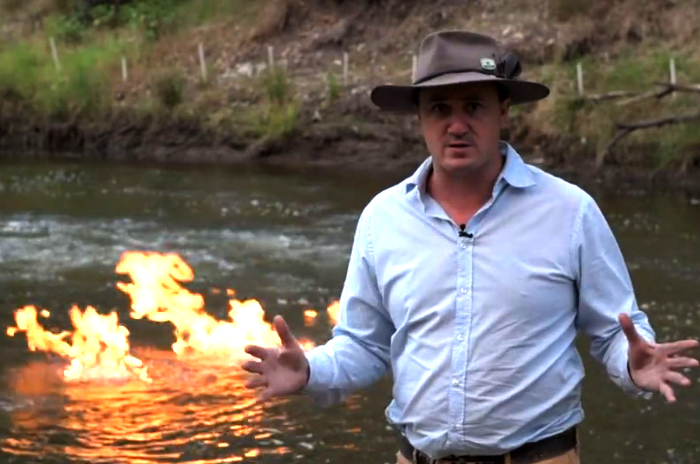 International attention has been drawn to the CSG industry in Queensland on the back of a YouTube video.

Greens MP Jeremy Buckingham has posted a video of himself lighting the Condamine River on fire.

Buckingham uses a kitchen lighter to set bubbling sections of the river ablaze, in what he says in a demonstration of the effects of nearby coal seam gas (CSG) operations.

“Holy f***. Unbelievable. A river on fire,” he exclaims in the video.

“The most incredible thing I've seen. A tragedy in the Murray-Darling Basin.”

The Greens MP is seen setting gas vents on the river on fire, before rushing to move his boat away from the flames.

He said the river held the flame for over an hour.

The video has already been reposted and shared tens of thousands of times, and has a view count in the millions.

“This area has been drilled with thousands of CSG wells and fracked. This river for kilometres is bubbling with gas and now it's on fire,” Buckingham said.

“This is the future of Australia and the Murray-Darling Basin if we do not stop the frackers who wants to spread across all states and territories ... this is utterly unacceptable.”

Investigations were launched when the methane seeps in the river near Chinchilla in south-west Queensland were first reported in 2012.

A 2013 report by scientists from the Norwest Corporation found several possible contributors to the bubbling in the river.

They looked at scenarios including natural events like drought or the flooding aquifers after floods.

They also determined that human activity including CSG operations and water bore drilling could be contributing factors.

Professor Damian Barrett, who looks specifically at unconventional gas for the CSIRO, has been monitoring the Condamine gas seeps.

“The isotopic signature is telling us it's coming from coal at that point in the landscape but coal is quite close to the surface and there's a naturally existing small fault line, which cuts the river at that point,” he said.

But his studies have shown that the rate of the gas flow has increased in the last 12 months.

Origin Energy operates CSG wells in the district, and has released a statement on the matter.

“We're aware of concerns regarding bubbling of the Condamine River, in particular, recent videos demonstrating that this naturally occurring gas is flammable when ignited,” the statement said.

“We understand that this can be worrying, however, the seeps pose no risk to the environment, or to public safety, providing people show common sense and act responsibly around them.

“Ongoing research has identified several scenarios that could be contributing to the seeps including the natural geology and faults (formed tens-of-millions of years ago), natural events such as drought and flood cycles as well as some human activity, which includes water bores and coal seam gas operations.”

Buckingham’s video can be seen below.