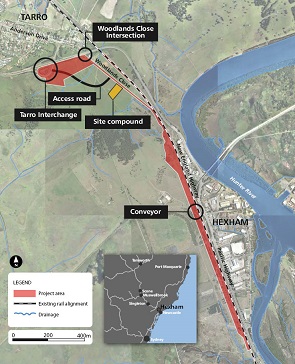 Planning is just about done and work will soon begin on the $163 million Newcastle rail freight upgrade.

The Hexham Relief Roads rail infrastructure project near Newcastle will kick-off in November. The large-scale engineering and construction job is being delivered by the consortium of firms in the Upper Hunter Valley Alliance (UHVA).

When it is complete, the program is destined to make coal transport to Newcastle Port more efficient by easing rail congestion along the Hunter Valley coal rail network.

Five new rail-relief roads will be constructed to allow more flexibility for train movement controllers to keep engines off main lines in the event of breakdowns or delays.

The down-ward coal line from the terminal to the mines will be removed and replaced, existing rail infrastructure and public utilities will be modified, vehicle access tracks and signalling gantry over the relief roads will be put in place as well.

Deputy Prime Minister and federal Minister for Infrastructure and Regional Development, Warren Truss, says; “the project involves the construction of five new railway tracks allowing trains to be temporarily diverted off main tracks while they wait to enter the loading facilities at Newcastle Port.”

“The five tracks will each be about 2km in length and able to hold two or three locomotives and up to 90 wagons on each length of track.

“They will be built at Hexham, a semi-industrial area 15km northwest of Newcastle, on the western side of the track near the Hexham Railway Station.”

Construction is scheduled to take 15 months, to be delivered by the UHVA, which is comprised of the Australian Rail Track Corporation, Leighton Contractors, Parsons Brinckerhoff, Coffey Geotechnics, KMH Environmental together with the ARTC Ansaldo STS Network Control Systems Alliance providing signalling and communications works.

More information is available from the Department of Infrastructure.