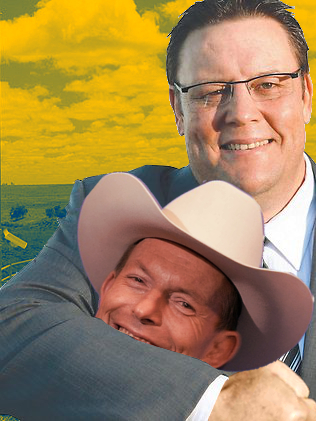 Senator Lazarus brought a petition to Mr Abbott's office this week which called for greater community consultation, assessments of health impacts and the creation of exclusion zones around CSG.

Limiting rampant CSG expansion is a key platform for Lazarus, who has consistently questioned the Government over the issues in Parliament.

The former rugby league great joked about new methods he might use to get Mr Abbot’s attention, while speaking at an anti-CSG rally in Sydney this week.

The 'squirrel grip' technique involves an aggressive clutching of the genitals on a prone opponent incapable of defending himself. It is also known as the 'Nutcracker Suite' or 'Christmas surprise'.

"If that doesn't work, I've got other things up my sleeve, like the grapple tackle, the chicken wing and even the crusher tackle."

The Senator then took the joke to a new level, referring to a 2001 incident in which league player John Hopoate was found to have inserted his finger into several opponents' anuses.

"If that [the squirrel grip] doesn't work, I'm prepared to use the Hopoate tactics," Senator Lazarus said.

"I have threatened Tony Abbott to shirtfront him about this issue.

"To stand up and take notice, and go and see for yourself.

"Tony Abbott in 2013 said that no-one should live anywhere near, or in amongst coal seam gas wells, and I think he should remind himself of that."

"I don't think the Prime Minister is going to take it seriously," he said.