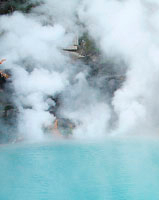 Winton Shire Council in western Queensland has made progress on its plan to build a $3.5 million geothermal facility to use the heat from artesian water as an energy source.

The company planning to build the outback geothermal plant says powering all council buildings with geothermal energy will be an Australian first.

“Well there's not a council in Australia that would be powered by geothermal energy, this is definitely the first,” Mr Parker told ABC reporters.

“Australia is the only country and continent that hasn't really exploited its geothermal energy and we've got some really good resources under the ground there.

“Winton is the first to really realise that.”

But he expects other small rural councils will want to pursue the technology.

“We're talking to 10 other councils at the moment who are in the pre-feasibility stages of looking at geothermal,” he said.

“Actually one has now progressed to the design phase, which is fantastic.

“This particular council has realised there's an opportunity for them to make some savings similar to Winton.”