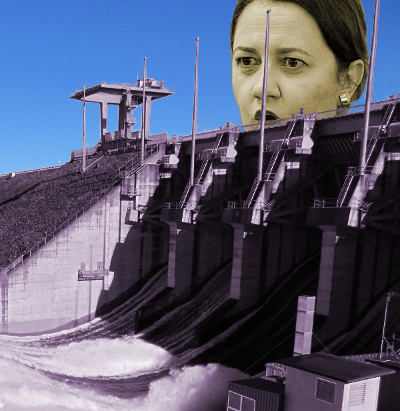 The Queensland Government will spend $15 million on dam feasibility studies that it says Barnaby Joyce is avoiding.

One of the Deputy Prime Minister’s sole policy pushes is the National Water Infrastructure Development Fund, which provides loans for project including dams.

But Queensland Water Supply Minister Mark Bailey says that because the NWIDF is paid in arrears, many councils and non-government organisations do not have the funds to pay up front.

Over a dozen different groups have been offered funds under the NWIDF, but most are fairly small organisations.

The Palaszczuk Government says it is stepping in to provide what is effectively $15 million worth of loans for 10 projects, with the Labor government to recoup the money when the NWIDF reimburses it.

“Mr Joyce failed to tell these proponents that they would only receive funding in arrears,” Mr Bailey said.

“Essentially this is a loan that the Turnbull government will have to pay the Queensland government back.”

The feasibility studies will look at a possible dam, weir and pipeline for the Atherton Tablelands, and assess plans for the Hells Gate dam on the upper Burdekin River.

The two most expensive projects are feasibility studies for the Urannah Dam and Emu Swamp Dam, both of which will cost over $3 million. A full list is accessible here.

But Agriculture Minister and Deputy Prime Minister Barnaby Joyce says he is not to blow for the delays in the delivering funding, blaming in-fighting between Premier Annastacia Palaszczuk and her deputy Jackie Trad.

Mr Joyce says a rift within the Labor government had prevented progress on Rockhampton's Rookwood Weir, something the federal coalition had committed funds to.

He said that just one feasibility study – for the Nullinga Dam – had proceeded, despite a $20 million effort to fast-track 14 of the reviews.

Both of the projects Mr Joyce mentioned were put forward by State Government bodies, not the councils and non-government groups that Queensland says are missing out.