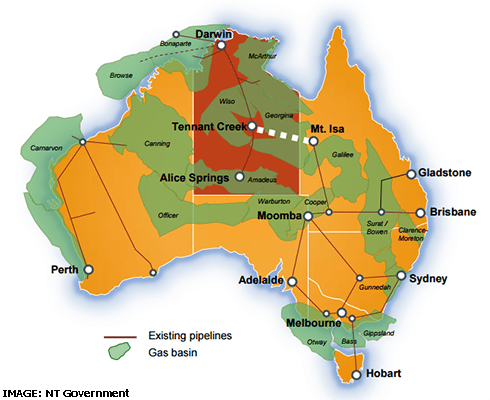 The ACCC says it makes sense for Australia’s various gas network to be connected to each other.

Part of the reason Australian businesses pay close to the global gas prices for fuel that is produced in Australia is that it is expensive to move gas between networks that are not connected by pipes.

Australian Competition and Consumer Commission chairman Rod Sims said this week that the fledgling Northern Territory gas industry and gas users across the country could benefit from the NT’s plans to build a pipeline to Queensland.

Speaking at a gas producers’ industry conference in Darwin, Mr Sims said the Northern Territory had incredible potential in the east coast gas market it is imperative to have onshore gas development.

Mr Sims said the key to make NT gas commercially viable and break the existing monopoly structure was the development of the NGP project.

The ACCC is not making any friends in gas industry this year, after its report slammed a large number of pipeline operators for engaging in monopoly pricing.

That report did note that a lack of regulation allowed companies to run wild.

While some argue that the gas market is in fact too heavily regulated, the ACCC says less than 20 per cent of the transmission pipelines on the east coast fall under the National Gas Law and National Gas Rules.

It also found that price gouging was being enhanced by a tightening market, in which new gas sources head almost entirely to LNG plants in Queensland for export.

“Without this [future] supply it is clear that gas prices must increase, which will damage commercial users and increase household energy bills,” Mr Sims told the conference.

“The level of desperation in the industry is rising sharply.

“It seems to me that the Northern Territory could play a significant role.

“The potential job creation and investment in the Northern Territory would go hand in hand with the preservation of jobs and investment which might otherwise be threatened for industrial users in the south.”

At the same conference this week, Chief Minister Michael Gunner launched an official inquiry and a moratorium on hydraulic fracturing begins in the NT.

Mr Sims said industry reports have indicated that a lot of NT’s gas does not require hydraulic fracturing.

“While we do not purport to weigh in on the debate surrounding the environmental issues, we consider that policy makers need to consider the cost or benefits of projects on a case by case basis,” Mr Sims said.

“This is particularly pertinent to the Northern Territory, given the prospective gas projects are likely to be spread across the vast landscape and potentially represent different levels of risk.”

However the pipeline plan has plenty of critics, as it comes at a time when many large scale fossil fuel projects are being mothballed.