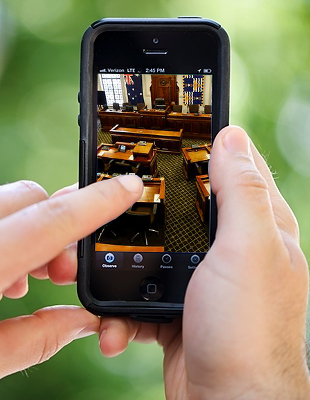 Researchers are looking at potential risks and benefits in the future of mobile e-voting.

Such risks became very apparent ahead of the recent NSW state election, when the iVote app had to be repaired after it was revealed it could have been used to change people’s votes.

Mr Zada says the next phase of the research will involve as many people as possible.

“We have devised a quick 21-question survey that is available online and by post. The survey responses will enable our research team to set a baseline from which to continue our research,” he said.

“We believe this research to be an integral part of understanding what will be involved to introduce a mobile e-voting platform in Australia.

“And with the... trial of the iVote system, we believe this is the best time to gauge the public’s opinion of the technological concept,” Mr Zada said.

Associate Professor Paul Kwan, research team member and Mr Zada’s supervisor, said that while the technologies that can make mobile internet e-Voting a reality already exist, it is nonetheless critical to increase the public’s awareness and gauge their perceptions for this alternate channel for voting to succeed.

The anonymous public survey is open until 30 April 2015, and is accessible here.