Swimmers dive through restrictions into old mine site 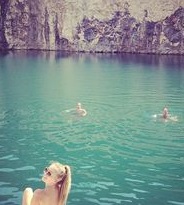 Continued efforts to keep Mt Isa residents safe from themselves have not worked, with authorities now ramping up restrictions on swimming in ‘Poison Waterhole’.

Poison Waterhole is a favourite swimming spot for many Mt Isa locals, but given that it is also an abandoned mine-shaft and on an active mine lease – it is inherently dangerous.

Anyone caught swimming there now faces a $22,000 fine for illegal entry to a mine lease.

Queensland's acting Commissioner for Mine Safety and Health, Paul Harrison, says authorities have done almost all they can to keep people out of the dangerous Poison Waterhole.

“They've put rocks across the road, they've put signs up, they've put a fence up and people have torn the fence down and moved the rocks off the road and knocked signs down and used the signs as shooting targets and the like, so the mine owner or the leaseholder has been doing basically what any reasonable owner would do.”

“It's basically a danger or a hazard because the actual Poison Waterhole itself is an abandoned mine on that mining lease, it's not inspected or kept up to scratch.

“One of the problems, there was a recent accident there where a young man fell and hit the rock wall, there was a makeshift flying fox there, so people are jumping off the high wall and into the water.

“It's a pretty dangerous activity.”