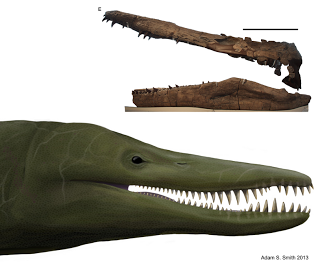 An ancient tooth found in a riverbed near Gippsland has led to the discovery of a pre-historic water-dwelling reptile.

The fossilised tooth was analysed under a microscope by researchers at the Victoria Museum, a series of tiny ridges revealed it came from the mouth of a “pliosaurid” which swam the southern Australian waterways over a hundred million years ago.

Currently the Gippsland water board is interested in protecting the New Holland Mouse - a tiny endangered species recently discovered in the area, which would be hardly a mouthful to the giant pliosaurid.

The new dinosaur is the largest known aquatic reptile to have lived in Australian waters; measuring up about five metres long it is a full metre longer than the previous title holder. The pliosaurid was found in the same area as previous plesiosaur remains, suggesting the two giant characters often shared the same hunting grounds.

Palaeontologist Erich Fitzgerald says: “It is significant because it suggests that the ecological setting was much more complex than we realised. This highlights how little we actually know about these river ecosystems.''

He also says the pliosaurid was lacking in table manners, judging by its teeth: “They are basically fish-impaling and ripping teeth,” Dr Fitzgerald said, “they are not designed for chewing.”

Nowadays Gippsland is a contemporary settlement - complete with modern water supplies - but in the pliosaurid’s day Gippsland was 1500 kilometres inland and presented a totally different vista.

The findings are outlined in Alcheringa: An Australasian Journal of Palaeontology by Dr Fitzgerald and colleagues Thomas Rich, Patricia Vickers-Rich and Roger Benson.