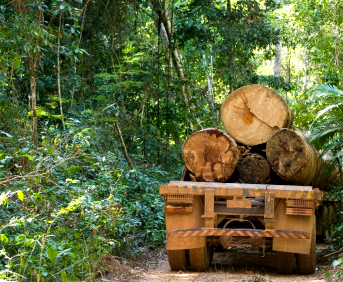 Since the Senate passed a bill to include the burning of native forest biomass as a green power measure under the Renewable Energy Target (RET), expressions of interest for new projects have been flooding the Tasmanian Government.

Pavel Ruzicka, a member of the Resources Minister's Special Advisory Council, said it was fantastic news, given that local loggers produce millions of tonnes of native woodchips every year.

“Lifting the RET is the best thing that could have happened because it's sent a great ripple through the industry,” he told the ABC.

“[Biomass is] an untapped market and it has a whole suite of uses, not just simply for burning.

The State Government has been desperate to find alternative uses for the state’s growing piles of wood residue, with no woodchip mill in the south of the state causing the surplus to grow.

Resources Minister Paul Harriss has backed the biomass burning proposals over other plans.

“Wholesale export of woodchips is not the best option,” he told reporters.

“Across Europe and the world, biomass is widely accepted as carbon-neutral and considered environmentally green energy.

“In Bavaria, there are over 700 small biomass plants dotted around the country.

“Now that's with a forest industry about the size of Tasmania's, yet here in Tasmania we have very few biomass plants.”

Brett McKay from McKay Timber was excited about the possibilities too.

“Just think how fantastic it would be if you had one of the major developments, like the Macquarie Point redevelopment or the Cenotaph proposal that they were talking about, if that was able to be heated and had all its hot water and energy provided from sustainable bioenergy,” he said.

But given that there is already a surplus of electricity in Tasmania, proposals for any large-scale biomass plants could rely on a second Basslink cable, to export electricity to Victoria.

The idea is one of many under consideration within the State Government, and Mr Ruzicka said there had been some cursory talks with state distributor TasNetworks.

“We look forward to further chats with them.”